Well I didn't post about my weekend yesterday because it's such a blur. I needed a day to catch up and gather my thoughts!

Last week wore me out and this weekend didn't provide much in the way of rest but I think I will survive. By Friday I was so tired that I didn't even bother bringing my running gear with me when I left the house because I knew Thursday night that I wouldn't be running. I usually make myself run regardless but sometimes you just have to skip. I wasn't into it, I was tired and there was no way it would have been a fun, productive workout. I don't regret skipping out. I cooked supper when I got home and tried to get to the couch as soon as possible. Mac found a new toy while helping Dad "fold" his laundry... yeah, dad's belt. 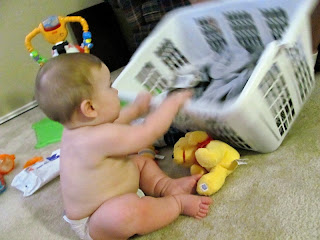 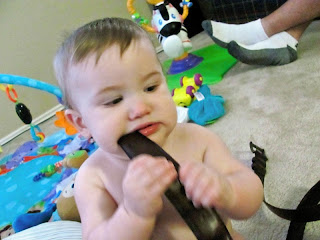 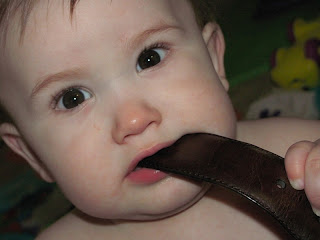 Saturday morning I got to sleep in till 7. Then up and at'em cooking spanish rice, lime cupcakes and lemon poppy seed cupcakes for my friends birthday party that evening. Well, I got the rice done and the lime cupcakes baked before Jimmy left for his softball tourney but I was then left with baking lemon cupcakes and icing both sets while chasing around a crawling adventurous Mac. I finished in the kitchen at 2pm. I was beat. I still had to shower and get ready and get Mac ready. Luckily, Mac wore himself out in his jumper... yes I had to contain him so I could actually finish icing cupcakes. 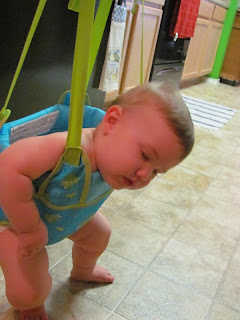 He had not gone completely to sleep because he was still lifting his head back up but I am glad I saw him when I did because he could have choked with the way he was sitting!! :( But I scooped him up and put him to bed and off to the shower I went!

We got to the party at 4, when it started, and it was nice to just sit. Mac was taken out of the carseat by Lesley and I didn't see him again for a long time! hahaa! And I forgot my camera so I have no pictures from the party. We took the play pin so when Mac finally passed out we didn't have to rush off.

Sunday we went to church, First Baptist Church in Pflugerville. I really like this church and am looking forward to going a lot. Sunday afternoon Mac was awful!! He would NOT take a nap so he was cranky!! This picture was taken with my phone because I sent it to my Mom and told her I was sending him to her!! 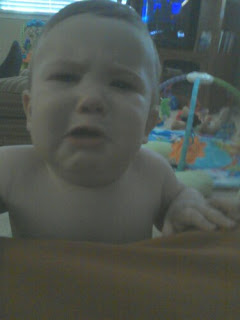 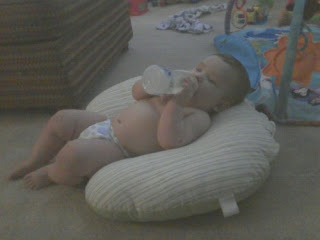 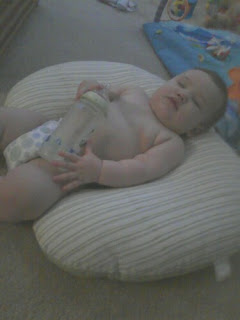 He was out! It was 6pm but I just let him sleep, we put him to bed shortly after he passed out! I wasn't far behind him but I did manage to stay up long enough to watch "Next Food Network Star" and then I went to bed too!! 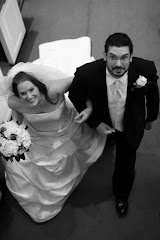 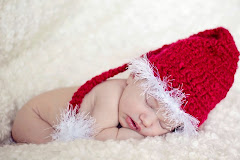 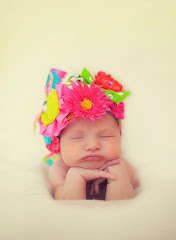